From October 30 to November 1, Dialogue SOE organized the Tutzing Balkan Talks in 2015 at the Evangelische Akademie in Tutzing, Germany. The talks focused on issues of geo-politics and security, socio-economic challenges and the refugee and migration crisis in the western Balkans. 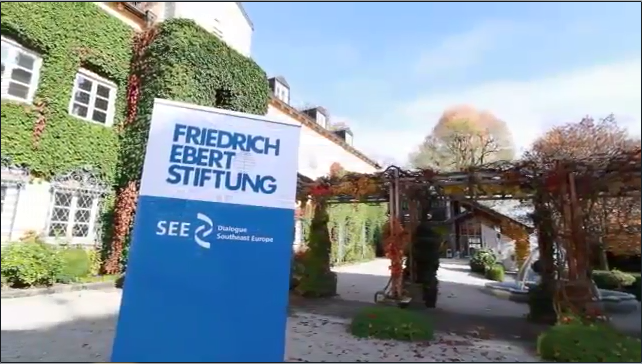 Geo-Politics, Security and the Russian Question

The talks opened with a keynote session that addressed the transformations that occurred in the relations between the EU and Russia in the wake of the Ukraine crisis. An emphasis was put on the effects the Ukraine conflict had in the Western Balkans.  It was also noted that Europe was in the midst of a paradigmatic shift, one that would change the continent more than 9/11 and also that Russia remained committed to revise Europe’s post-WWII peace order, despite Russia being a signatory to both the Helsinki Accords and the Paris Charter.

The ensuing discussion took two broad directions: a discussion of Russian influence within the respective Balkan states and differing assessment of the threat Russia and other outside powers are posing to Europe’s peace-order.

Russian influence in Serbian politics and public life had coincided with a collapse in support of EU membership from within the country with a decrease from 70% to a staggering 40%. There was general agreement that the integration of the Western Balkan states (WB6) should remain a geopolitical priority for the EU and that this could be accomplished without directly interfering with Russian interests. Failing to do so however, would only serve Russia to increase its odds in destabilizing the region further, as it has already began to various extents in Macedonia, Montenegro and Bosnia-Herzegovina.

Integration and membership remained still desirable for the region, another participant agreed, but the process ought nevertheless to be based on values rather than on shallow notions of realpolitik.The EU should embrace its role as a “club of European democracies.” This naturally meant that some states in Europe could not and would not become EU member states unless their respective leaders made decisive and categorical political transformations, personally and socially.

A sharp intervention came from one of the participants who insisted that it was simply unrealistic to expect EU membership for the WB6 at any point in the near future. Instead, their focus, he argued, should be on improving regional cooperation, following the model of the BENELUX countries.

Socio-Economic Challenges in the Western Balkans

This chapter of the talks focused primarily on the still vastly unreformed economies of the region. Indeed, there has even been a roll-back in the regional economic picture to early 2000s levels. Without meaningful economic coordination efforts, the region would remain “a blip on the radars’ of international investors.”

The participants agreed though that even at the micro-economic level, basic steps were not being taken to improve the regional economic situation. Vocational training was sorely lacking, all agreed. The fact was affecting youth, in particular, whose endemic unemployment rates made them “effectively a ticking social time bomb.” Everyone expressed grave concern that it was only a matter of time before this growing sense of youth alienation and dissatisfaction boiled over. One participant, however, cautioned the group to not view social dissatisfaction merely as a “security concern” but that it could rather “be a force for democratic change and a path for the EU to find new leaders and stakeholders in the region.” The speaker further cited the example of the Bosnian plenums as one model for a new kind of political organizing that can emerge out of social protest(s) and contribute to the process of democratization.

Another participant raised the fact that the region’s economy remained backward largely due to the incompetence and unwillingness, primarily, of the region’s leaders to change. Still, initiatives that produced results, especially from the grassroots, tended to “breed success.” As such, individual and targeted projects still had the potential to significantly affect economic prospects in the region and within individual states.

The idea of harmonizing industrial and economic policies was widely embraced and endorsed by most of the participants.

The final session focused on the refugee crisis and the regional migration situation. Several participants noted that the general response in the region to the arrival of refugees has been fairly positive and that civil society groups have performed admirably in providing refugees with humanitarian resources. Nevertheless, all concerned expressed their fear that if/when the refugees were to settle in the region that it could provide grounds for a nationalist/chauvinist reaction.

As the discussion turned to the closing of borders, one participant argued it was only a matter of time before the refugees found new routes. If the Croatian-Serbian border was closed, then Bosnia and Herzegovina would become a major transit route—something the BiH authorities are not prepared for. The same, it was agreed, also applied to Montenegro and possibly even Albania.

The conversation then turned to the question of Balkan migrants and the problem of region’s continued brain drain. One participant pointed out that Germany would return thousands of migrants from Kosovo to the country in the coming weeks and months, after a major exodus earlier this year. The potential instability that this would bring to Kosovo and therefore the region was significant, especially as social discontent continues to simmer in that country but also Macedonia and Montenegro.

A final contribution raised a structural question, arguing that the refugee crisis was forcing the EU to ask “where are its borders? Are they in the Balkans? Are they in Turkey? Are they, in fact, in Syria?” A previous contribution seemed to provide the answer by suggesting that EUs relationship with its "neighborhood(s)" was a "complex tapestry" in which neat borders and divisions were neither possible nor desirable. The same speaker, however, noted that the fact this session elicited comparatively few comments illustrated how profoundly unprepared and wanting for policy both regional actors and their European counterparts were as it concerned the refugee crisis.